The next process along on the devices is around Picking. Picking focuses on the sales side of your business processes, going around the Warehouse collecting items relating to a specific order or multiple orders ready for shipment.

When you click on the Picking Option by default you are presented with the option of Pick & Shipment. Similar to that of the receiving processes there are visible numbers next to each function indicating how many activities need actioning within your location. 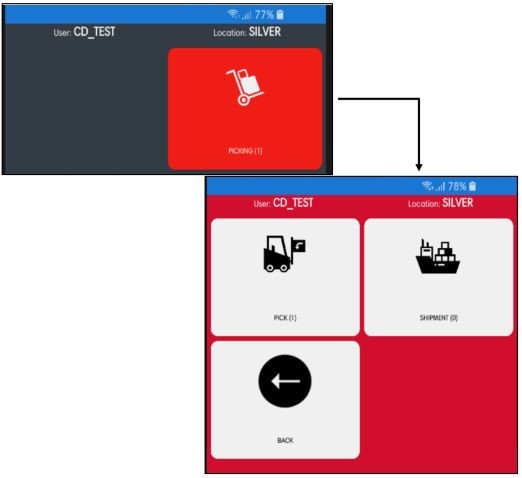 If a user selects the Pick tile, they will be asked if they are Entering a Specific Pick?

NB: This message will only come based on your Handheld User Setup

If once you have chosen a pick or a pick has been given/ assigned to you, you decide you want to change it, you can.

On the device when the pick information comes up no screen, you can click on the pick number and choose to Adjust/ Cancel the Warehouse Activity Line, by saying Yes you will then be taken to the following screen where you be asked to specify instead which pick you would like to proceed with.

As you begin the pick you will first be prompted to enter the Item No. the device will have presented you with the item that it wants you to pick, this will be the first item on the pick in Microsoft Dynamics 365 Business Central. By scanning the same item on the screen, you are simply validating against the pick line this is the item you are picking. 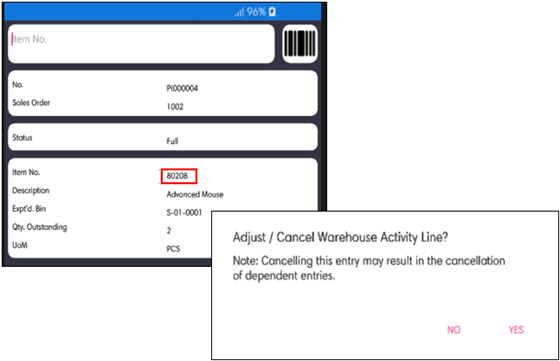 You can at this point choose to change to a different item, this may be in circumstances where you know what else is on the pick and choose to action that line instead. When prompted for the Item No simply scan in a different item code to eth one on the device. If it exists then the item code along with all the pick lines details about it will change. If not the device will error.

Don’t panic if you pass being able to change the item code at the beginning you can change it at any point before posting. To do this click on the Item No. field on the device. When the pop up appears on screen asking whether you want to adjust the line say yes. At the top of the device it will then prompt you for the Item No again.

Following one from entering the Item No, you will be prompted to enter a Bin Code, there is an Expected Bin code presented you on the device however at this point you can scan a different bin. The bin code states where you will be picking the stock from.

At this point you won’t know whether Microsoft Dynamics 365 Business Central holds that item in that bin – it is sometimes the case where stock is physically in a location but systematically it is not there.

Once the Bin Code has been entered, the Quantity to Handle will need to be entered, this will be how much stock they would like to pick from that bin. Regardless of whether you have changed the bin or not, you can’t pick more than the quantity on the device.

NB: It is at this point that a validation will happen to confirm whether the item you plan on picking can be taken from the bin entered. If not it will error. 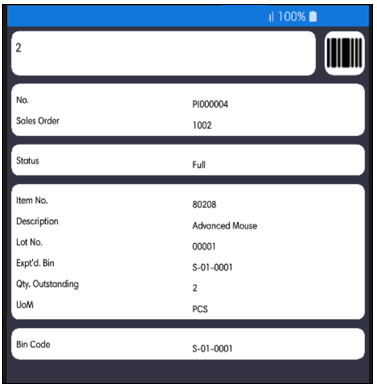 Once the quantity to Handle has been entered the pick line will automatically post. There if there no more lines it will go back to the beginning, asking If you would like to Enter a Specific pick or not. If there are more pick lines it will present you with the next line in the pick.

During the pick you may be asked to enter the Lot No. this is because your item requires lot tracking. If the item tracking has been added during the sales order process then on the device you will see which lot number you need to pick. If it hasn’t the you can tell the device which lot for the item you will be picking.

When setting up your locations for certain warehouse processes, you may decide that you want to setup your warehouse for Directed Put- away and Pick, a setting on the Location card under the Warehouse FastTab.

Directed Put-Away & Pick gives you access to advanced warehouse configuration features that can greatly enhance your efficiency and data reliability. In order to use this functionality, you must first set up several parameters in your warehouse location, such as Bin Types and Zones.

When doing a pick in an advanced location the first thing that you will be asked is to determine what Zone you are working in. 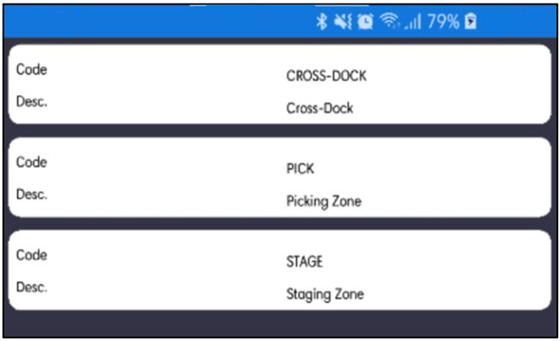 The zones you see on the device come from a setup page called Zones. Zones which have a Bin Type code flagged for Pick will be visible. 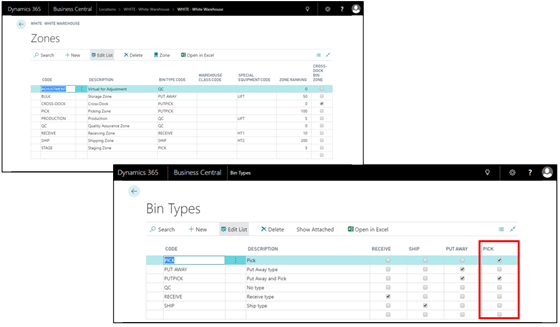 NB: If you create an entry in the Handheld Whse. Zones if will use entries in that page to show on the device compared to that of the default zones.

Once you have chosen your Zone, you will then be prompted as to whether you want to pick a specific pick or not. Once you have selected your option the picking process will be as above, being prompted at certain stages for certain information.

Based on how your warehouse runs there are other functions that can be added to the picking process. These include : Ex. Pick, Invt. Pick & Post Pick. These options aren’t visible on the device menus by default but can be added if you prefer to pick using one of these options instead. 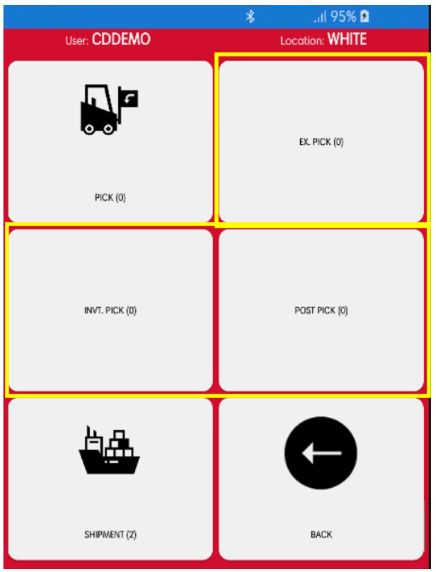 When this option is selected you are choosing to do an Express Pick. This option will most likely be used if you are planning on using Advanced Warehouse picking, as Ex. Pick does not prompt for zone, device users will process all lines on pick regardless of which zone they are in.

Once the option has been selected like previous pick processes users will be prompted to pick a specific pick yes or no. If the warehouse user chooses No a list of picks for that user will be displayed.

Once a selection has been made it run through the pick as described previously prompting at certain points for specific information relating the pick if not given during the scanning of a barcode.

NB: The Picking tile is also linked to a Cue so you will need to modify that as well if you are using inventory picks instead of warehouse picks

Once the option has been selected like previous pick processes users will be prompted to pick a specific pick yes or no. If the warehouse user chooses No you will be presented either with the next inventory pick in the pick list in Microsoft Dynamics 365 Business Central not being worked on, by another user . Or you will be presented with a pick that has been assigned to you by your warehouse manager.

Once a selection has been made it run through the pick as described previously prompting at certain points for specific information relating the pick if not given during the scanning of a barcode.

The last function in the picking section is around posting the Warehouse Shipment. This would only be used when using functions such as Pick or Ex pick.

NB: The assumption would be that if the warehouse pans on using Shipments on devices that they have a means of giving their warehouse employees the Warehouse Shipment Numbers.

Data items which have been set as enabled but are not fixed can be unflagged. These are only flagged by default if you wish to capture that information they are not necessary in posting a Warehouse Shipment.

Once you have got to the end of capturing all the data you need to for the shipment you will see the Post button at the bottom of the device screen. 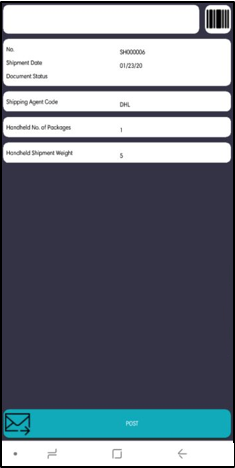 On clicking this the Warehouse Shipment will be posted in the background and any extra information captured will be transferred to the posted document in Microsoft Dynamics 365 Business Central.

The ‘Container Pick’ function works in a similar way to the ‘Pick’ function, but it can be used when you are also using the ‘Clever Container’ App.

The ‘Container Pick’ can be used in situations where you need to pick the entire contents of a Container for a sales document.

The ‘Container Pick’ option is located under the ‘Picking’ section on the Handheld device. 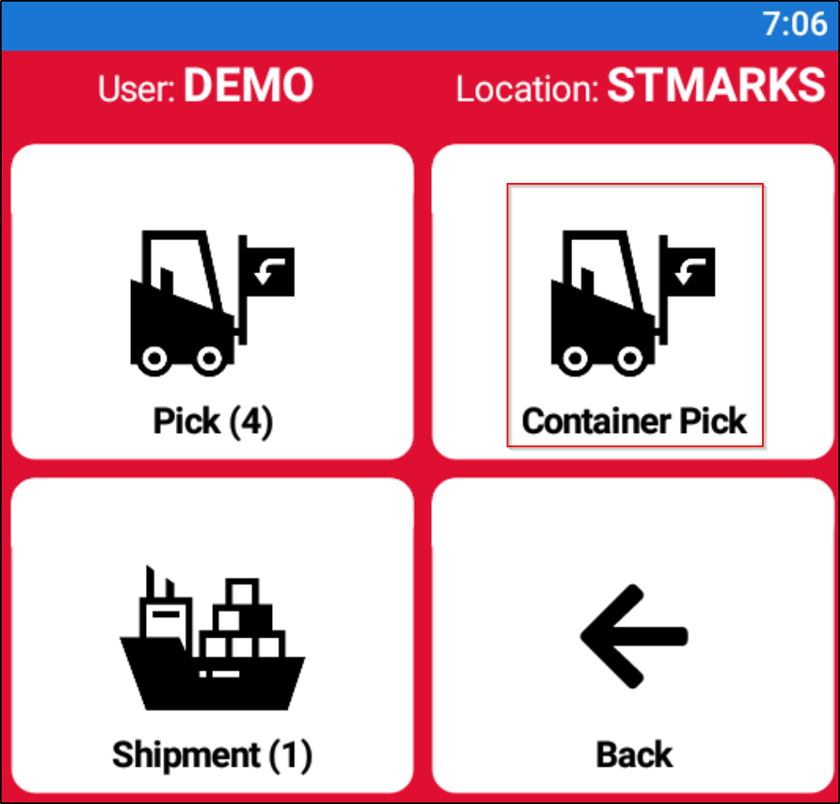 When you select the ‘Container Pick’ option on the Handheld device, you will need to populate the ‘Container No’ field with the Container you would like to pick.

After confirming the ‘Container No’, you will then need to define the ‘Place Bin’ but you won’t have to scan in each of the items individually, as you would with a standard pick, as the system will already know which items it is going to pick based on the contents within the selected Container.

The ‘Container Pick’ can then be posted. 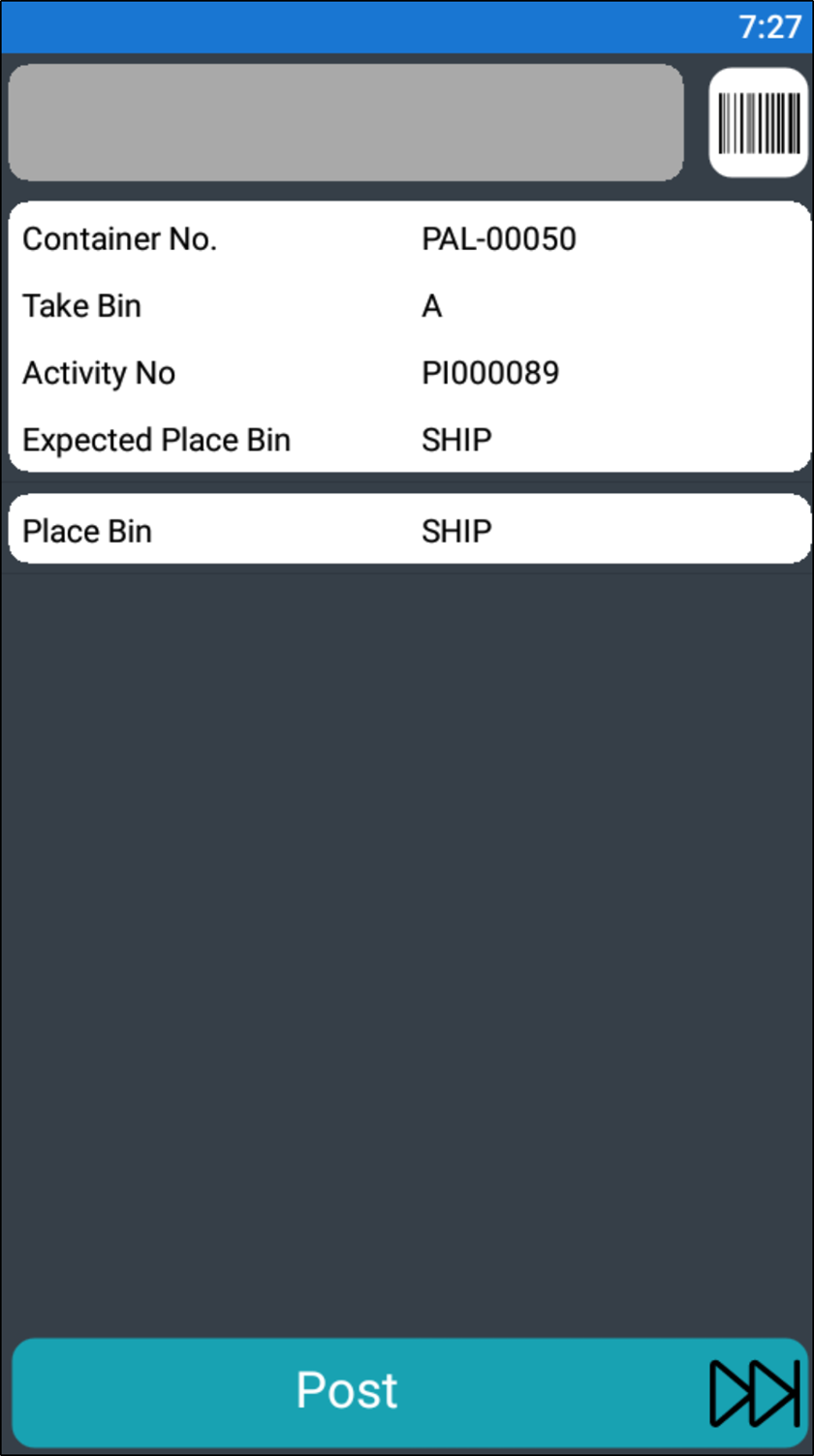 Once complete, all items located within that Container will be picked and moved into the ‘Place Bin’ and the quantities updated on the associated sales documents. 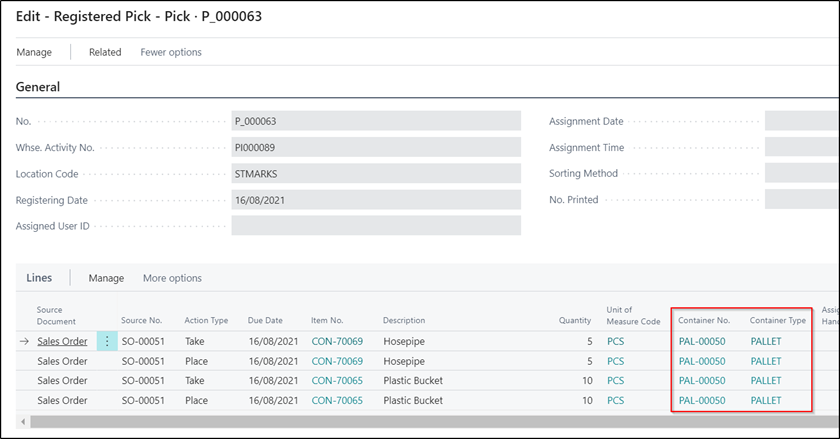