Mentioned previously a Stock Count can be done on the devices. There are two different ways in which a stock take can be done.

The first option Phys.Inv requires some setup to be done first in Microsoft Dynamics 365 Business Central. 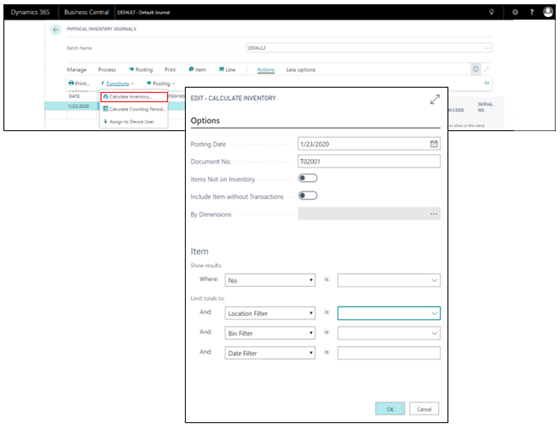 The request page will pop up asking you what filters to apply to the entries before pulling them through onto the journal. It is up to you how you would like to create your journal.

Once the journal is created you can then run the Assign to Device User function which based on your filter options will apply a Device User to a journal line. 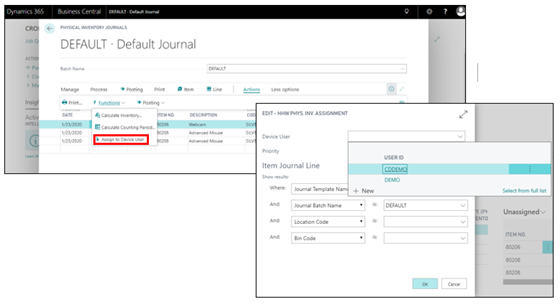 Or you can go down each line individually and populate Assigned Handheld User the field.

NB: Along with assigning to device users the priority can be set if you want the user to prioritise some journal lines over others.

On the device you will see that you know have a figure against the tile Phys.Inv. this indicates to the warehouse employee how many lines have been assigned to them to count. 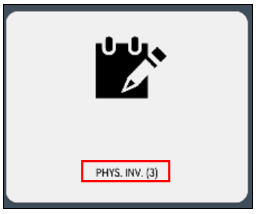 To make sure that the figure is populating correctly you need to make sure your Device Menu setup is correct. The Cue field No. needs to be pointing either at Phys. Inv Lines or Whse. Phys. Inv. Lines- if your location is setup for advanced warehousing.

Clicking on the Phys Inv tile the user will be prompted to enter the Bin Code. The bin code along with the Item No and other details are visible on the device. 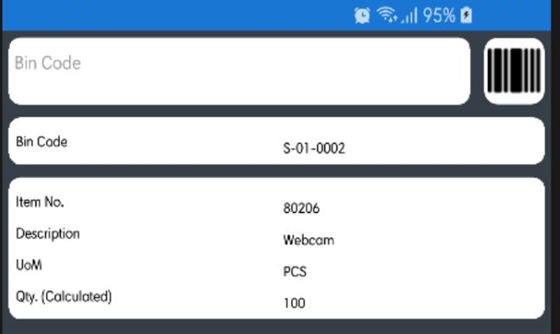 NB: You can hide the quantity by enabling the flag blind stock count in the handheld setup page.

Once the bin has been entered you will then be prompted for the Item No, like the previous screen the details can be seen on the device.

You will finally be prompted for the Quantity, once confirmed a Post button will appear at the bottom of the device. In posting the line you are updating the corresponding line on the journal you created in previously.

NB: Posting the entry on the device does not post the line on the journal. The final posting is done in Microsoft Dynamics 365 business Central by someone like the warehouse manager who is happy with the difference in what the client thinks there is in stock compared to what is physically in the warehouse.

You will have noticed during the process that an Option button appeared at the bottom of the device. The options in here depend at which stage of the count process you are at. 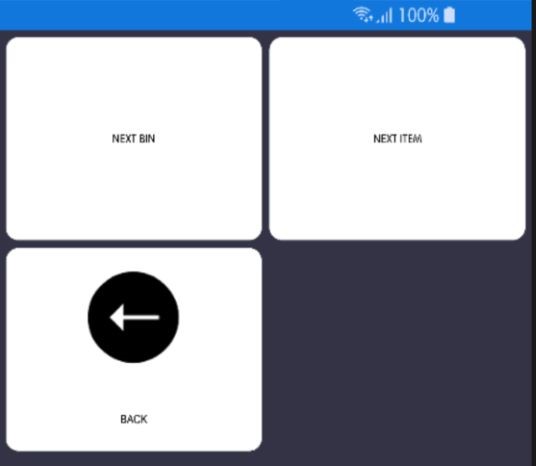 If you were to select the option Next Bin you would be moved onto the next assigned to your device in the journal. In Microsoft Dynamics 365 Business Central the journal lines will be updated as follows:

By carrying out the action above on the device you have instigated to Microsoft Dynamics 365 Business Central is that the bin you were in has been counted and to move onto the next bin. In Microsoft Dynamics 365 Business Central what that has done is checked all the lines relating to the bin that you have scanned and negatively adjusted the amounts of all the lines to be 0 (Qty Phys. Inventory).

You will also notice this bin and the lines on the journal have now been set as Counted. Marking the line(s) as counted means it will not reappear back on the gun for recount. To do that you would have to set that field back to needs counting.

NB: The Count Status field only gets updated when the count is carried out through a device if it is adjusted manually in NAV then the line will remain as Needs Counting.

If when you scan the bin you are presented with an item which is no longer in the bin you can choose the option Next Item. This action will appear once the bin code and the item code has been scanned.

Once all the items in the bin have been counted whether that’s through simply counting them as they are all there or using the next bin function it will take you out the loop of staying in that bin and move you onto the next bin, where you will be prompted to scan in the next bin.

Similarly, to staying in the bin until the Next Bin function is pressed, if there are multiple lots for an item it will stay in that item until all lots have been scanned or the Next Item function has been pressed.

NB: If the items you are counting are lot/serial tracked numbers or variants are applied to them you may also be prompted on the device to confirm those bits of data if not already held in a barcode when scanned.

When the user clicks on this option they will be asked to scan the Bin Code as soon as they scan in that bin code they will be presented with the first item in that bin, according to Microsoft Dynamics 365 Business Central . Like the Phys. Inv functionality they will then scan the item and type in the quantity. The same options of Next Bin and Next Item are also available and work just like they did in the other function (Phys. Inv).

As you start to scan in bins and items the journal will start to populate depending on what I have scanned in.

Similarly, to the Phys. Inv function if Microsoft Dynamics 365 Business Central is telling it that there are two items in a bin and you only scan one of the items and hit the Next Bin option it will create the second line on the journal but have the Qty Phys. Inventory field showing 0.

Once either Journal has been completed and the lines updated in Microsoft Dynamics 365 Business Central a user will need to go the correct journal and post it after a quick check has been done. Once the journal is posted that is when the adjustments will be made.

NB: If lines need recounting and you want them to be done on the device you will have to change the Count Status back to Needs Counting. If you are making the adjustments through Microsoft Dynamics 365 Business Central this status is not important.

The other option is to have all users post to a default journal, rather than having each individual user create their own journal. This setup can be found detailed on the handheld setup part of the user guide on the Req. Phys. Inventory FastTab.