This document outlines how barcode processing works in the Android version of the Warehousing app. It will detail what happens when a barcode is scanned, supported scanner manufacturers and models, how the scanner can be configured and tested in the app and how the scanned data links with information sent to the app from Business Central.

Operations in the Warehouse app are driven by a list of data items. For example, a receipt will contain a list of data items specifying what data the app needs to get from the user in order to process the receipt. Each data item may contain one or more GS1 identifiers. When a barcode containing GS1 formatted data is scanned by the app it will check each data item to see if it contains a GS1 identifier that matches a field contained in the barcode. If it does, then the value of that data item is set to the value of that field and the data items are submitted to the server.

The GS1 data format uses Application Identifiers (henceforth called AIs) to store the data for each field. Different fields have different AIs. A full list can be seen at https://www.gs1.org/standards/barcodes/application-identifiers The Warehouse app only supports a subset of these AIs – see Appendix 1 for a list of these AIs. AIs fall into two categories – fixed length and variable length. Fixed length items have their length set in the GS1 specification – for example expiration dates are set to be 6 characters long. Variable length items are ended by a delimiter (typically ASCII character 29) or the end of the barcode if a delimiter is not present.

The below diagram illustrates the format of a GS1 barcode: 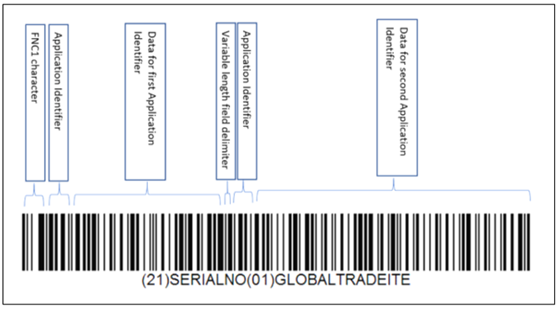 All GS1 barcodes start with a FNC1 character. Following that there must be an AI. If an AI is not present, then it is not a valid GS1 barcode. Following that is the data for that AI – if it is fixed length then the next n characters are read where n is the length from the GS1 specification. If it is variable length, then characters are read until a delimiter or the end of the barcode is encountered. In our example the barcode’s first AI is for the variable length Serial No. field (21). So, the data is read up to the delimiter to give ‘SERIALNO’.

If there is any data after the end of the last AI’s data, then the process is repeated (excluding the FNC1 check). In our example the next AI is for the fixed length Global Trade Item Number field (01) which must be 14 characters long. The data for this field is ‘GLOBALTRADEITE’.

NB: The text below the barcode is in human readable form. The actual data does not contain the brackets around the AIs. The delimiter (ASCII 29) is also not a visible character in text representations of the data.

The below flow chart displays the logic for parsing a GS1 barcode in the Warehouse App: 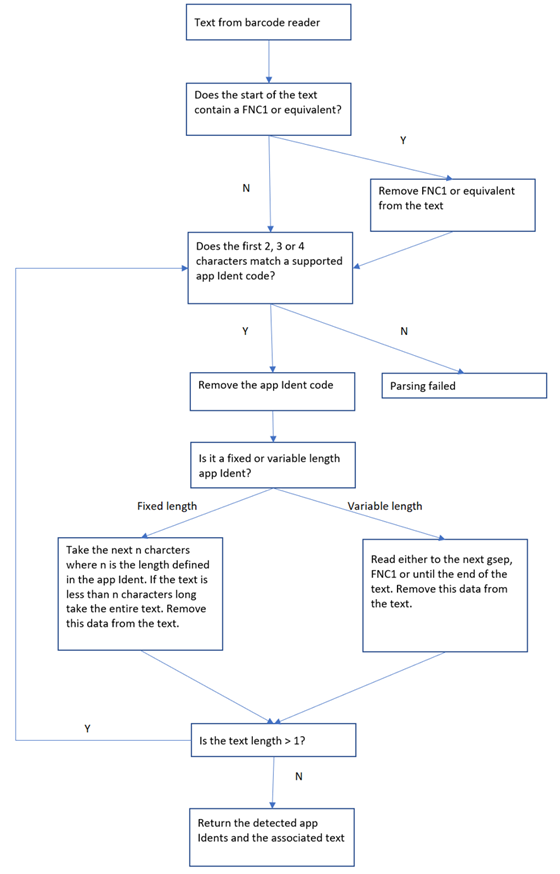 There are a few points to make about the GS1 parsing logic:

The below flow chart displays what the warehouse app does when it receives a barcode from the scanner. 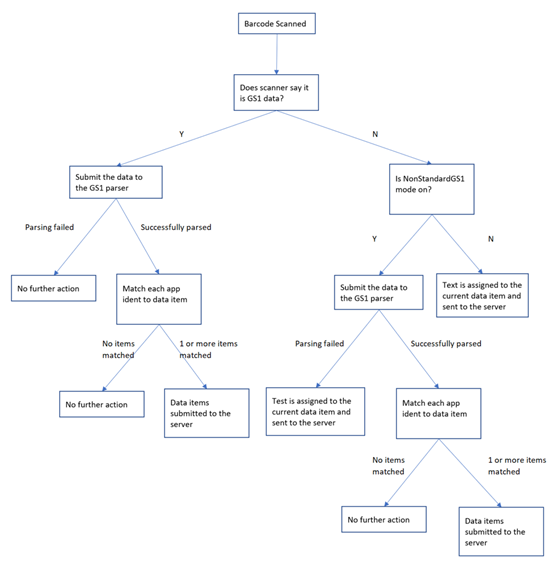 The app supports ‘strict’ (StandardGS1) and ‘non strict’ (NonStandardGS1) processing modes. If the scanner does not say it is a GS1 formatted barcode the data may nevertheless still be GS1 compliant. If the app is set to non-standard mode it will try and process this data as GS1 even if the scanner says it is not a GS1 barcode. If parsing the data as GS1 fails, the entire text from the barcode is assigned to the current data item.

If the barcode is parsed successfully as GS1 data, the parser returns a list of the AIs present and their data. These are then checked against the data items in the current operation. If a scanned AI matches the AI for a data item, then the value of that data item is set to the data for that AI. Appendix 3 lists the AIs that are defined for each operation.

The Warehouse app can work with Honeywell and Zebra scanners. The below tables say which scanners should work with the app according to the manufacturer’s documentation, and which scanners we have actually tested.

We use version 1.31 of the Honeywell Barcode reader SDK. This supports the below models:

NB: That some Honeywell scanners are not configured to return the GS1 delimiter by default – so parsing of variable length GS1 data may give incorrect results. To enable the scanner to return this delimiter scan this barcode:

We use version 4 of the Zebra SDK (Symbol. Xamarin EMDK). This supports the below models:

We support version 4.1 and above.

In the Warehouse app the scanner can be configured in the Device tab of the settings screen: 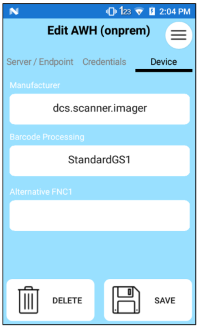 If nothing is chosen in the Manufacturer field, then no barcodes will be processed in the app. There is a distinction between scanners that can be started automatically (e.g. built in scanners) and those that need to be triggered by the user (e.g. the device’s camera.) The automatic scanners are enabled in the background when barcode input is appropriate - the user then just scans a barcode using the trigger on the device. For the manual scanners a button is added to the user interface which the user must tap to open the scanner.

The app detects which scanners are present automatically, with one caveat. When the method in the Honeywell SDK to detect the scanners runs on a non-Honeywell device it crashes the thread the detection processes runs on, meaning no scanners are detected. To get around this the Honeywell detection only runs on devices whose manufacturer is a known Honeywell manufacturer. Currently these include Honeywell and Foxconn. If in future another manufacturer needs to be supported, they can be added to by putting an XML file in the below format at Android/data/com.tecman.Warehouse/files/HoneywellDeviceNames.xml

The app contains a diagnostic facility (as of version 1.0.12.0) which lets the user scan a barcode and see how the app has processed it. It can be accessed from the main menu by viewing going to the hidden buttons (drag the left-hand side of the screen to the right) and selecting ‘Scanner Diagnostics.’ It uses the scanner that has been set up in the settings screen, if a scanner has not been configured in the app it will display a message advising you of this.

This screen contains a Supported GS1 Idents button. Tapping this displays a list of app idents supported by the app (see appendix 1 for a list of these).

The screen also displays the selected scanner and the GS1 option: 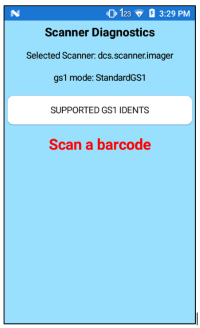 After a barcode has been scanned the symbology, data format (GS1 or text) and raw text are displayed, and whether it was parsed as a GS1: 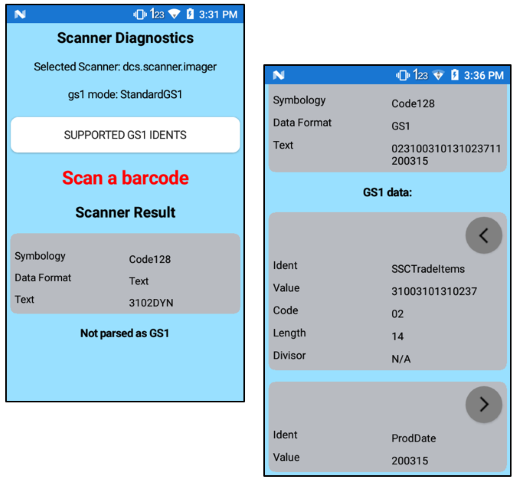 If the barcode was parsed as a GS1 the values for each detected app ident are displayed.

The below table displays the AIs currently supported (as of version 1.0.12.0) in the Warehouse app. 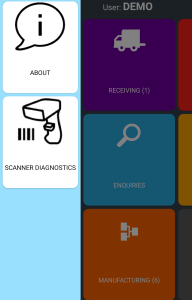 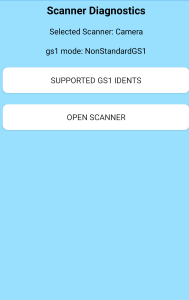 This lists the symbology specifier returned by each scanner and what they are converted to for use in the app.

* The app checks if the barcode starts with a FNC1 character. If it does it sets the data type as GS1. The ZXing library does not detect GS1 formatted data.

Below are tables for various functions detailing which AIs are mapped to which data items in version 7.1.2.0 of Clever WMS Devices.